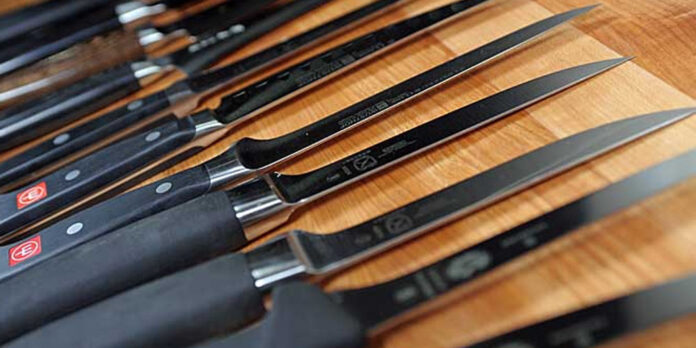 Nothing is more frustrating than leaving tasty meat pieces upon that bone since you are not able to cut them.  It’s an unpleasant feeling, but when you use the right knife, you can avoid it. The boning knife proves useful.

A boning knife is a culinary knife used to cut into fibrous tissue, tendons, and flesh to extract raw meat off the bone. Boning knives do have qualities that enable them ideal for the task. Here you will take a look at a few of them right now.

Boning knives are typically five to six inches long; however, some can be 9 inches. They feature a very uniform appearance: thin and pointed. They are available in a variety of forms and designs, based on the desired usage.

Because dealing with meat on tiny bones necessitates skill, the flexible blade is better equipped for the job. To reach the flesh, the blade must bend following the curves of the bones. In cutting delicate tissues or cutting fat, flexible blades function well.

Stiff blades are best for big, thick cuts of meat, such as cattle, lamb, or pig, when a greater force is needed. It might be unsafe to use a flexible blade on such meat since it might readily bend with force and cause harm.

The arching or curved blades curved upwards over the handle, similar to a cutlass. Its design is useful for removing the skin of a fowl or a fish with a single stroke into the skin as well as flesh. The blade’s curve provides for excellent maneuverability into the meat. By rotating the blade in the direction of backward and forwards, the blade may simply be utilized to cut away fatty tissue.

Boning knives with a straight blade are perfect for slicing huge portions of meat such as beef, as well as delicate slicing and sculpting. They’re likewise perfect for skilled cutting on the go.

Narrow blades slice into flesh with little friction, making them perfect for extremely precise cuts. They can also cut through narrower angles efficiently than wide blades.

Certain boning knives feature the finger guard incorporated in a handle to protect the fingers from slipping down the blade when slicing slippery meat.

The boning knife is primarily used to remove flesh from bones, although it may also be utilized for a variety of other purposes.

The majority of the time, boning knives have been used to cut flesh for cooking. Using a boning knife, you may save costs by cutting your pieces of meat rather than purchasing them from the butcher.

Some meats, such as pig, do have a thick coating of fat which must be removed prior to cooking. You may strip fat away by using a boning knife while leaving the meat below intact.

A boning knife’s thin, pointed, and a sharp blade is particularly good for removing the peels or covering of fruits. A boning knife may also be used to extract the core from an apple while leaving the majority of the fruit intact.

The thin blade is perfect for slicing layers of layered cakes and slicing cakes into various forms. A boning knife seems to be ideal in coring cupcakes before frosting them.

A boning knife may be an excellent culinary partner for anybody who likes meat. You could say goodbye to wasted or torn meat using the extreme precision of a boning knife.

Facts You Need to Know About Multi-Gym

William - May 16, 2022
When setting up your apartment/house, one of the most important things to consider in beautifying that space is the type of furniture you intend...

Best 2 in 1 Pressure Washer Everyone Might Want For Their...

Characteristics And Uses Of Boning Knife You Should Know

4 Reasons You Should Enroll Your Child in a Montessori Childcare...